His name is Francis (Paa Kwesi Darlington Abeka) Hughes  also known as PQ for short. He is a Ghanaian musician born on 4th August in the mid 80s.

hmmm guess the funny aspect of his life?…. His mum told him, he was born in Obuasi on the Golds but on his birth Certificate he has Tema as his place of birth… can you imagine? This is a true Ghanaian. He lives in Nungua estate.

Francis Hughes as he is normally called, has four (4) siblings even though I know of his immediate sister after hm (back born)….lol
He began his elementary school with Ghana National Preparatory School (Ghanaps) in the early 90s and then moved to Presbyterian Junior Secondary School, Nungua in the late 90s and continued to Presberyterian Senior Secondary School, Teshie (Presec) from 2002 to 2005 before going to Takoradi Polytechnic where he obtained HND in Art.

Whilst in School, he became the President of Choreodramatize i.e Choreography and Drama Department on T‘poly campus, He was the Drama and Choreography director for the 2007/2008 academic year and the Music Director for The Apostolic Students and Associates (APOSA) for the 2008/2009 Academic year

He is one of the founders of the most popular and award winning group ‘WISEMEN‘ on T’poly campus. In the group he is known as ‘AHMED’….LOL

He is a Graphic Designer/ Sculptor, Drama and Dance Tutor and a Musician. 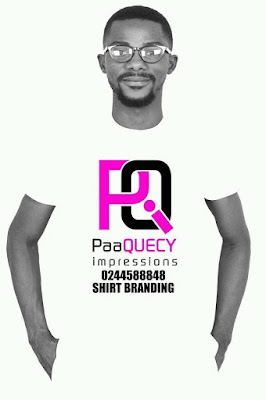 He teaches as a Visual Art tutor at Dannaks SHS and he is the C. E. O. of PQ Impressions.

With this Mentor thing I think Growing up He loved
the way his Dad and mom sung together so they were his mentors untill he discovered OJ and His
Junior Brother Papa Owura, but to the best of my knowledge I think Owura had more impart on him.

Jamming Papa – This happened because he got the opportunity to be the same group with him ‘BOIZ VOIZ’.

This I would rather not say now cos I’m
still aiming at something bigger for both FOGI and my church choir. The
Apostolic Nungua Central district Choir.

He fellowships with The Apostolic Church, Ghana, Nungua Bancos Assembly off the Nungua Bank road.

Currently, he is the organizer for Friends of God Incorporated, He is the Music Director for The Apostolic Church, Ghana, Nungua Central District.

Back to the Revelation